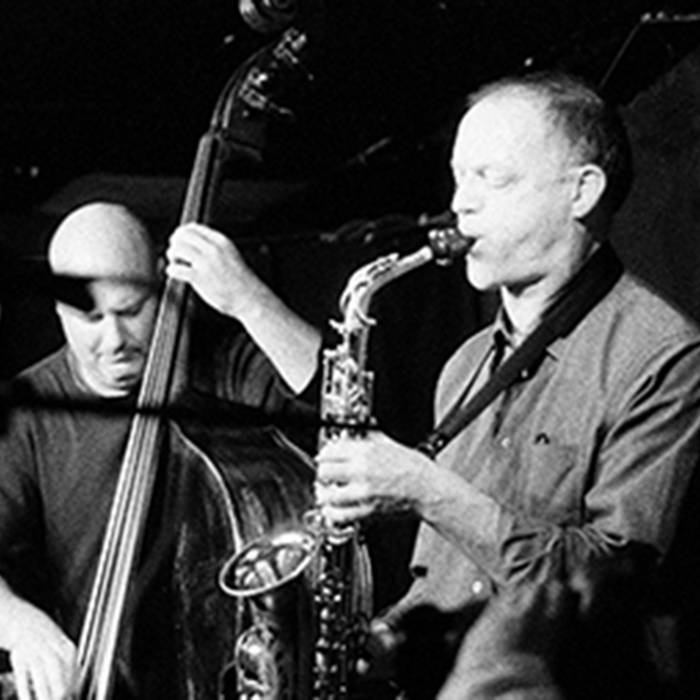 Le Cagibi is a vegetarian café in the Mile End district of Montreal. Until gentrification forced it to smaller digs a few blocks northward, it hosted regular Tuesday improvisation evenings under the Mardi Spaghetti banner. Featuring mostly local players with occasional out-of-town guests, the series provided an informal opportunity for the testing of new combinations of musicians, or for old friends to play together once more. On August 20 2013 the duo of Nicolas Caloia on double bass and Yves Charuest on alto saxophone played a half hour set, made available here for the first time. On the 25 minute main track Caloia starts with a low end pizzicato foundation above which Charuest blows an almost continuous stream of darting and circular lines punctuated by squeaks and howls. Caloia switches to the bow mid-way, eventually winding down the track to its swirling conclusion. The shorter second track is comparatively minimalistic in approach, with small sounds coaxed from each instrument.
Lawrence Joseph

On August 24th, 2011, The Murray Street Band played at La Sala Rossa to commemorate, as it was described, the “more or less 25th anniversary of the band”. For the occasion, the band was to perform as a 13-piece ensemble.

For the first set though, The Murray Street Band performed as a sextet, actually calling itself The Murray Street Six. About midway through the set, the sextet was joined by two guests. One was clarinetist Lori Freedman, a well-established member of the Montréal improvised music community and occasional member of the band. The second guest, playing alto saxophone, was someone I did not recognize. Before the intermission, John Heward introduced him as Yves Charuest. Even though I had been involved in the improvised music community for over 10 years by that point, it was the first time I heard his name. To my defense, it was Charuest’s first public performance in many years. Indeed, personal reasons lead him to put his musical career on hold around 2001.

This brings us to this concert of August 20th, 2013. By that point, Charuest had re-established himself as an active member of the Montréal improvised music community. Furthermore, Charuest and Caloia already collaborated frequently. They were regularly playing in duo a well as in trio with guitarist Sam Shalabi and Charuest had joined Caloia’s Ratchet Orchestra for the concert of Halloween 2012. They also sometimes crossed path in ad-hoc formations.

In the following years, their collaboration extended to other projects: BCH+C (the long-running BCH trio joined by Charuest), Four-Sided Circle (a quartet with Lori Freedman and Josh Zubot, sometimes with a guest from out of town), Chaosmos (a quartet lead by Philippe Lauzier), Still (a trio with drummer Peter Valsamis), Stir (the aforementioned trio augmented with pianist Agustí Fernández) and a trio with Karl Fousek, just to name a few.

The concert was part of the Mardi Spaghetti Series, a series dedicated to improvised music. The series was established in 2008 at Le Cagibi, a café that was located in the Mile End neighborhood until had to move in the spring of 2018 because the new owners of the building wanted to double the rent. Since the new space is too small to host concerts, the series had to find a new space. After a short wavering period, it now takes place at Casa del Popolo.

Mardi Spaghettis usually present two sets by different musicians. On that evening, the first set featured the duo of Isaiah Ceccarelli (drums and symphonia) and Katelyn Clark (organetto). After an intermission, Charuest and Caloia took the stage. This digital release contains their complete set.
Mathieu Bélanger