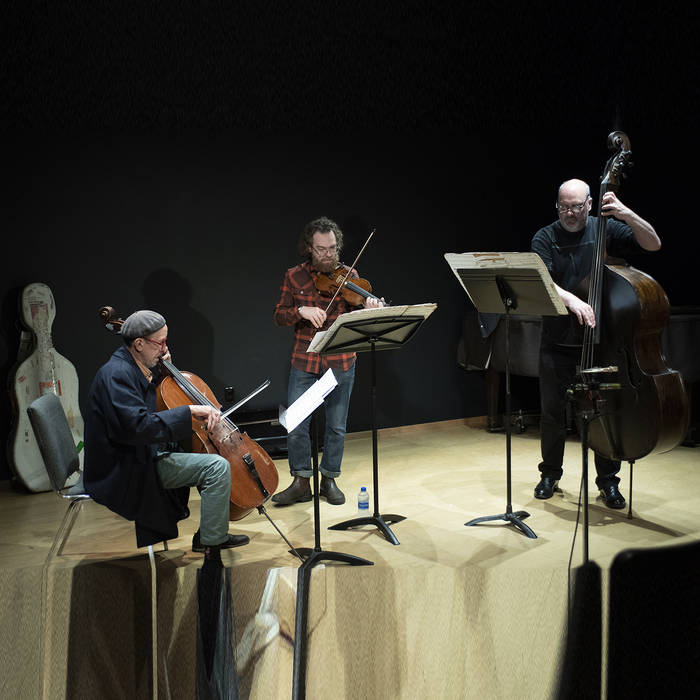 In a jazz setting, string groups have traditionally served as backdrops to combos, mainly to sweeten up the sound. With little if any opportunity to do some improvising of their own, that left to the front liners, violinists, violists or cellists are pretty well relegated to accompanying roles, sawing their way through strictly notated parts, bows in hand, or occasional pizzicatos for added effect. But in other forms of music making, free improvising most notably, string players are given the opportunity to use their own devices. In the Sea is just that kind of unit that thrives on the resources of its players. Its lineup of violin, cello and double bass differs somewhat from a classical group, that might prefer a viola to the bass, even a piano.

Though its members come from points far and near, Montreal remains something of its point of convergence, for it is the home of its bass player and project instigator Nicolas Caloia. But his partners also have ties to the city: once member of the local creative music scene, violinist Josh Zubot moved to Vancouver in 2017, and has since found his way in his new musical surroundings. Ditto for cellist Tristan Honsinger: having fled to Canada in the late 1960s to dodge the Vietnam draft, he took off for Europe by the mid-seventies, gradually making a name for himself during a lengthy stay in Amsterdam and others in Bologna and now Berlin.

In its six year existence, this trio sports a pretty good track record on the international touring circuit, with two extended European sojourns and three on our side of the Big Pond, its most recent one taking place just this month. Also to its credit are two albums, and a third (a studio date in Vienna) still unreleased at this writing. After Stateside gigs in Chicago (two shows, one during a festival dedicated to improvising strings), Twin Lake, MI, Toledo, Cleveland, Buffalo and Rochester , the threesome headed North of the border with a stop in Ottawa before its closer at La Vitrola, one of three venues managed by the Casa del Popolo in Montreal.

Given their shared experiences and the fact they had six shows under their belts when hitting the stage, much was to be expected from them and they delivered, too. While each man is able to improvise with total abandon, their performance was a cunning mix of composed fragments by all members and open playing, performed in something of a stream of conscious manner. This was not your customary theme-solo-theme format, but a constant flow of new material cued in by the players. Improvisation played a big part in the proceedings, not only in the playing itself but also in the creation of an overall form. The music contained so many sharp pin turns, the players taking off on a dime at one moment, turning sweet and tender the next, then on to the next romp before too long. Honsinger, for anyone who knows him, uttered a few of his nonsense verses, more in the first than second set, and elicited some guffaws from bemused audience members. Of the two sets, they hit full stride by the second, the first more playful in tone, but searching for some focus. With Caloia rumbling at the bottom, Honsinger drove things along with his sudden attacks, stomping out the beat with his foot as Zubot wildly slid his bow. spinning out reckless phrases more like a country-fiddler gone mad than a calculating classical concert master. If improvised music is a high wire act, these musicians know how to stay on it at all times, with only the slightest of slips, no falls, and some neat juggling tricks along the way.
Marc Chénard